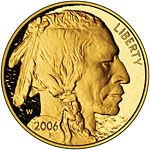 The America Buffalo Gold Coin is a gold bullion coin produced by the US Mint, which started being sold on June 22, 2006. The most notable difference between US American Eagle coins and American Buffalo coins is that the American buffalo is 24 karat bullion gold bullion, in other words 99.99% pure gold. The flagship American Eagles are 22 karat gold, in other words .9167% pure gold, with the remainder being a silver and copper alloy. Buffalo gold coins were introduced as a result of increasing global demand for 24 karat gold coins, and the popularity of Canadian Maple Leafs, Chinese Gold Pandas, and other 99.99 pure gold bullion items. 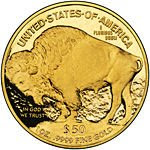 The 1 oz gold buffalo coin has a face value of $50. But as with other coins, this amount simply denotes that the coin is legal tender and has no real connection to the coin's true value, which depends on the current gold spot price. The design of Gold Buffalos is based on that of the Buffalo Nickel, which was minted from 1913 to 1938. The design, by James Earle Frase, features an image of a Native American man on the obverse, and an image of an American bison (buffalo) on the reverse. The obverse face also includes the date at the bottom left, and the word "Liberty" along the top right. The reverse face features the words "United States of America" along the top edge, below that to the righthand

( side are the words "E PLURIBUS UNUM" which is Latin for "Out of many, one" (a motto used in many official American symbols). It also reads "In God We Trust" at the bottom left, and at the bottom the face value, and below the face value the coin's weight and purity of ".9999 Fine Gold".

Buffalo gold coins have also been minted in uncirculated and proof versions of higher production quality (and high premium pricing), but these have been cancelled for the year 2009 because of unprecedented demand for gold bullion coins. In addition, 2009 production of the standard bullion buffalo coins have been delayed until further notice. Most of the increasing investment demand is for American gold eagles, so the US Mint is setting aside most of its gold stock for their production.

American buffalos struck in previous years can be found in coin shops and bullion shops. But you may have to shop around to find one because there is no supply of new coins this year.
at 8:49 AM